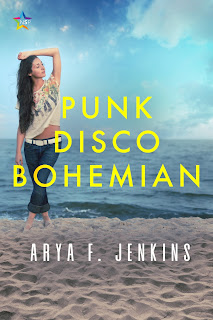 Punk Disco Bohemian is a literary transgressive novel and queer multicultural coming-of-age story set in 1970s Provincetown. Full of literary and musical allusions, it also celebrates literature, music and a unique time and place. This is an action-packed adventure about a young woman and the choices she makes to forge her independence in a gay mecca despite familial and societal obstacles.  Five-Star Customer Reviews : "Unsolicited review: Highly recommend this work. Read it in one sitting. The wild and evocative world of Provincetown in the 70s is expressed beautifully and clearly. Both challenging and lovely to be brought back into that time. Well worth the read. Great work Arya! Punk Disco Bohemian available in Google Play." Candyce Lucien Rusk, writer "...This is a fast-paced, finely wrought narrative that brought me an avalanche of cultural touchstones, which made me love the book even more. Jenkins is a master storyteller, from start to finish!" - Michelle
Post a Comment
Read more

BLUE SONGS IN AN OPEN KEY (story, reviews, how to purchase) 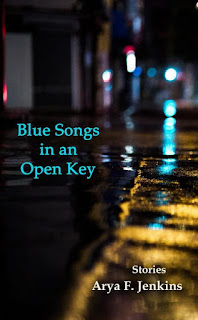 Blue Songs in An Open Key  is comprised of a series of jazz-themed short stories that were commissioned by Jerry Jazz Musician, a premier online jazz zine, and its founder, Joe Maita, and launched with the publication of my short story, "So What," which won the 30th Jerry Jazz Musician Fiction Contest in 2012. Jerry Jazz Musician published more than 20 of my jazz-themed short stories between 2012 and 2018. Blue Songs in An Open Key features 13 of those stories. Like bebop, which inspired the collection, the stories in this collection are meant to jolt and invigorate readers while taking them on a journey outside the norm.  Praise for my book: "These are powerful stories, with appeal to more than jazz aficionados." - Booklist " Her prose weaves many of the compelling characteristics of jazz--its spontaneous beauty, its poetic inspiration, its political essence, its cultural complexity --into an inventive fabric that so effectively envelops her reader in stories
Post a Comment
Read more

September 30, 2021
Sometimes it feels like readers' reviews are really the most important for an author. After all, it indicates someone's willingness to purchase and read your book baby and  comment on it without being prompted. That matters! Here's a lovely review of PUNK DISCO BOHEMIAN by a fellow writer and Provincetown fan, Candyce Lucien Rusk, that came up on a Provincetown Facebook page that I follow: "Unsolicited review: Highly recommend this work. Read it in one sitting. The wild and evocative world of Provincetown in the 70s is expressed beautifully and clearly.  Both challenging and lovely to be brought back into that time. Well worth the read. Great work Arya! PUNK DISCO BOHEMIAN available in Google Play. " Thank you, Candyce and all readers who like Punk Disco Bohemian well enough to review it! Know that your five stars and comments about my book on Amazon "customer reviews" and SM are truly appreciated!
Post a Comment
Read more 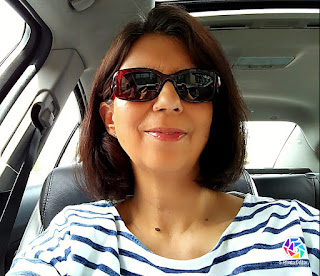 Arya F. Jenkins is a Colombian-American poet, writer and peace and social justice activist whose poetry, fiction and CNF have been published in numerous journals and zines. Her stories have received several nominations for the Pushcart Prize, and her poetry has also been nominated for the Pushcart. In 2021, one of her short stories was nominated for the Best of the Net Anthology. She is the author of a collection of short stories,  Blue Songs in An Open Key  (Fomite, 2018), and three poetry chapbooks,  Love & Poison  (Prolific Press, 2019),  Silence Has A Name  (Finishing Line Press, 2016) and  Jewel Fire  (AllBook Books, 2011). She edited  No War No More: Poems, Essays, Photos & Artwork for Peace  (Greenwood/Blue Lotus Press, 2007). Her mixed genre novel,  Punk Disco Bohemian , was released by NineStar Press in September 2021. Her short story collection, Angel in Paris & Other Stories, is due out in 2022. Poetry publications : Agave Magazine, Blue Heron Review, Dying Dahl
Post a Comment
Read more